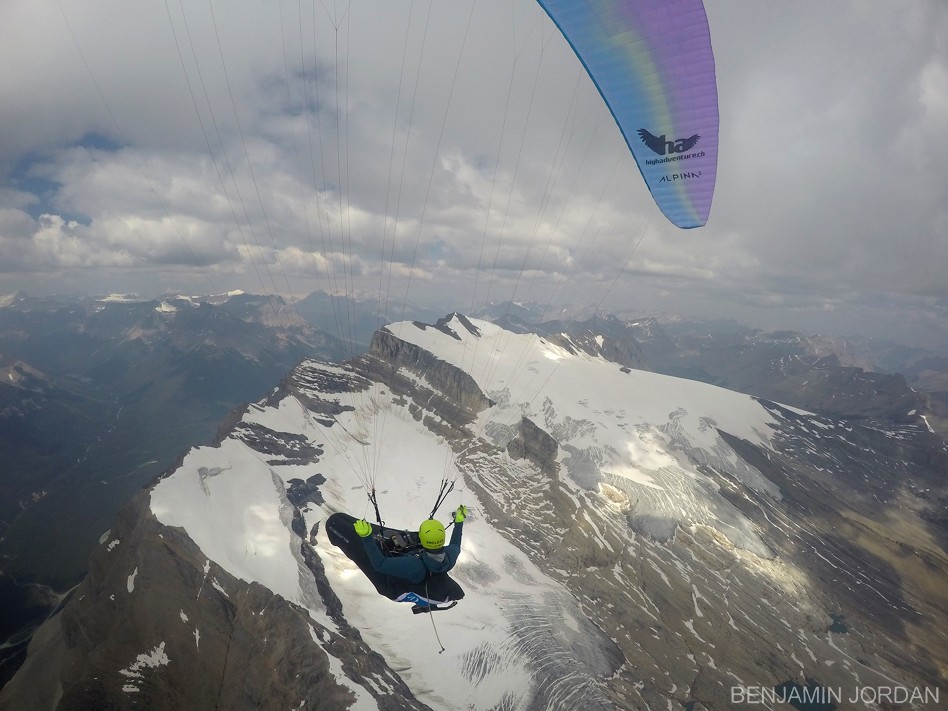 Mt Wilson Glacier - After staring at this beauty, while stuck on a mountain 20 km east for three days it was both intimidating and a relief to be on my approach. Towering more than 1500 m above Saskatchewan River Crossing below, Mt Wilson is one of the Canadian Rockies' countless 3000+ metre peaks which remain snow and ice-capped throughout the year.

From Rooseville, Montana to Prince George, BC, the 37-year old, Nelson-based filmmaker flew his wind-powered aircraft across some of BC's and Alberta's most rugged wilderness while having to make strategic landings atop mountain to avoid electrical storms or touching down within the forbidden boundaries of Banff National Park.

Despite the many challenges he encountered along the way, none compared to the psychological struggle of sitting alone in the alpine for weeks at a time, waiting for poor weather or wildfire smoke to clear so that he could fly on. Able to carry no more than 12-days of food, Jordan would occasionally land in populated areas to refuel before heading back up into the nearest summit to re-launch.

Of the entire expedition, Jordan was most nervous, and excited, about soaring over the glaciers and alpine lakes of Jasper National Park, North America's only National Park to allow Paraglider travel. Though its remoteness and mystery have caused pilots to stay away, Jordan dedicated a complete year to studying Jasper's unique topography with the ambitious dream of becoming the first person to fly across her entirety.

"I couldn't believe my eyes as I looked down upon the razor sharp ridge of The Endless Chain!" Jordan expressed, describing the moment he realized he had become the first human to free-fly over Jasper's famous unbroken line of peaks.

Despite extended waits between flights, his fortune continued for 50 consecutive days until the unprecedented levels wild-fire smoke of late August left Jordan with no choice but to complete his 1200 km, un-supported journey on foot. During a 4-day (214 km) walk from McBride to Prince George, Jordan had time to reflect on his unique accomplishment while stepping into the record books for the Longest Vol-Biv (Fly-Camp) Expedition in America.